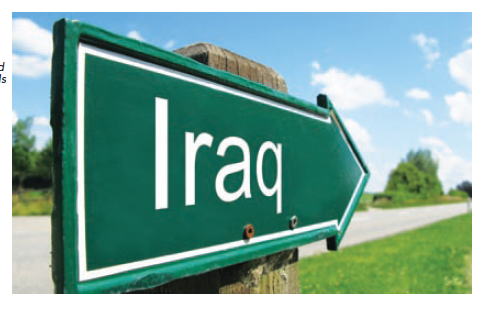 By 2020, Iraq plans to be producing 12 million barrels of oil per day. Is this beleaguered country the next shining opportunity for canny business people?

Few would argue that Iraq has had more than its fair share of tough times but that could all be changing.

A buzz around Iraq is building as investors look to cash in on the unplumbed potential of the war-weary country that’s now impatient to cast off the past and become a player on the global stage. And it has all the ingredients for doing just that.
What cards is Iraq holding? First, it’s sitting on the second largest oil reserves in the world. Second, it has a population of 30 million people who are hungry for the products and services that people in the West take for granted. Third, Iraq has had no infrastructure investment in about 30 years so there’s an enormous job ahead to bring the country into the 21st Century as far as roads and transport, education and health facilities, utilities and telecommunications.
Add to this the fact that the population is relatively well-educated and you have some major opportunities.
Let’s take the internet as an example. As of June 2010, an estimated 1.1 per cent of Iraqis had internet access, just 325,000 people from a population of 30 million, which means the

untapped potential for broadband and mobile providers is vast.
Already, global companies are rushing in. Iraq recently signed a $1.5 billion agreement with a French firm to build a suspended train system in the capital Baghdad within five years. The project will include 14 stations within an area of 22 kilometres, it will link several areas in the city, facilitating transportation and easing traffic congestion.
Last year, Rotana was the first luxury hotel brand to open a five-star hotel, the Erbil Rotana which cost the company $55 million to build. Following suit, the Swiss-Belhotel International announced the signing in April 2011 of a management agreement with Sardar Investments for the management of a four-star international hotel in Erbil, expected to open early 2012.
In addition, French hypermarket chain Carrefour is also close to opening its first store in Iraq, in the historic city of Erbil.

One Middle Eastern company that’s hailing Iraq as the new pot of gold for investors is Management Partners (MP), a management consulting firm that advises private and public sector institutions throughout Europe and the Middle East.
MP Partner Achmed Al-Shahrabani says much of the good news about Iraq is down to its oil reserves.
“The basic wealth of Iraq is oil. It’s a 95 per cent oil economy and this is not going to change in the foreseeable future. Oil is the revenue.”
How much oil is Iraq sitting on? A huge amount. A conservative estimate is between 118 and 124 billion barrels making it the world’s second largest oil and crude reserve. Up until recently, this reserve has been basically untouched but with the signing of the oil contracts last year, production is now ramping up and in the first four months of 2011 Iraq created $26 billion of oil revenue, says Al-Shahrabani.

“This is the latest announcement from Iraq’s Ministry of Oil, $26.7 billion, obviously the high oil price helps but the important thing is production is stable in terms of the output.
“If you extrapolate that number, by the end of the year $80 to $90 billion will be going into Iraq, that’s a considerable amount of revenue considering Iraq has 30 million people. While these are theoretical numbers, you see the buying power on the ground developing.”
Basically, Iraq sits on a significant amount of oil that hasn’t been tapped and production costs are relatively low because Iraq oil is relatively easy to get out of the ground. In May, the Deputy Prime Minister of Iraq confirmed oil production targets of 12 million barrels per day by 2020, says Al-Shahrabani.
“Today it’s 2.6 to 2.7 million barrels a day. It will probably reach five or six million barrels by 2016 or 2017 years which then makes Iraq among the top oil exporters. By that time, they’ll need probably a million barrels for local consumption in Iraq and the rest will be exported - that’s basically the blueprint of the Iraqi oil industry.”

Al-Shahrabani says now that Iraq is in better position to tap its oil wealth; the spending will come from both Government and the people. The Government is a major employer and it has already committed itself to dissemination of wealth throughout the population (in stark contrast to countries like Libya) so as it spreads the wealth through the country via salary raises, in turn the Iraqi people are spending on consumer goods.

With the start of the war with Iran in 1980 then the sanctions in 1990, you’re talking 30 years of no consumer market, so after decades of doing it tough, the people are in a hurry to catch up, they want white goods and mod cons, cars, houses, clothes, shoes, foodstuffs, electronics… and now the desire for designer labels is taking hold. The Iraqi consumer is brand savvy and will spend on higher price, luxury items.
“In Iraq, everything is imported so it’s a huge market for everybody in the region like Jordan, Turkey, even the GCC because a lot of the trade goes via here. Most of the trading houses in the UAE had a relationship with Iraq even in the years of the embargo.”

For UAE investors who want exposure to the potential of Iraq, Al-Shahrabani says there are three options. First, is the public market via companies listed on the stock exchange in Iraq. Second would be investing in a fund but this is not something Al-Shahrabani recommends
“There are a number of people with established funds but between announcing a fund, raising it, deploying it and exiting it, that’s a long story that sometimes does not materialise, so while people have announced funds, for me personally it’s unclear where these funds stand. What have they done? Where have they invested?”
Third is to go directly. “Say I want to invest in a certain industry because I know that industry, for example real estate or hospitality or oil field services or manufacturing… I’d partner with an Iraqi firm or an entrepreneur and basically set up a business in Iraq.

“These are the three options, just calling a stockbroker and saying ‘buy me 10 shares of x’ to ‘I want to be in on the ground’.”
Al-Shahrabani says people are now investing in hotels, in manufacturing, real estate, houses and housing units, in particular in the north, and these projects on the ground are happening. “Some investors are going into the north, particularly in Kurdistan, there are a lot of malls coming up. Then you have more institutional and strategic investors looking at Iraq, for example, there are plans to issue a fourth telecom license, a mobile telephone license, so this would obviously be for strategic telecom players or institutional investors because you’re talking hundreds of millions of investment.”

Every rose has its thorns though and Iraq has plenty of challenges for any would-be investor. Security being one of the biggest issues.
“Are there parts of Iraq that are still hotbeds of trouble? Yes,” says Al Shahrabani, “but they are in regions that are not so economically interesting.
“North Kurdistan is pretty safe, so the oil region around Basra and Misra can also be considered pretty safe. Baghdad has parts that are unsafe where more tension happens but like any big city, you avoid these areas. Diyala is definitely a security issue, the province on the east but that’s an agricultural province.

“These security tensions are not going to go away in the next 12 months but they are very manageable, that’s why I say it’s subjective, people need to make an assessment on where to go, like people need to make an assessment ‘am I going to go to Nigeria? Or to Mexico?’ All these countries have challenges. If you’re going to Iraq you need to be prepared not only for security, you need to prepare for how things work and for how the people think because it’s still evolving and happening, you need to be well-prepared but then it’s doable.”

Management Partners advises investors on how to do business in Iraq. From market research and product distribution to identifying the right investments and the
right partnerships.
www.m-partners.biz

Amar Shubar, partner at Management Partners helps an Iraqi based startup raise a six-figure investment round
»

Amar Shubar Speaks on Infrastructure and Construction at the Ghorfa
»

How to benefit from big data
»