Over the past few years, political and security conditions in Iraq have improved significantly, which led to significant growth of the Iraqi economy, driven mainly by increase in oil exports. Over the next 5 years, Iraq GDP is estimated to grow at a CAGR of 8.3%, reaching ~US$ 200b by 2018. However, Iraq healthcare sector is significantly lagging behind MENA region.

In terms of annual healthcare spending per capita, Iraq is lagging behind the MENA region. Compared to a MENA average of US$ ~510, Iraq healthcare spending per capita in 2010 was only US$ 340 (see figure 1). In terms of healthcare infrastructure, Iraq is also lagging behind MENA. For example, while MENA region had an average of 17 hospital beds per 100,000 capita, Iraq had only 13 hospital beds per 100,000 capita (see figure 1). 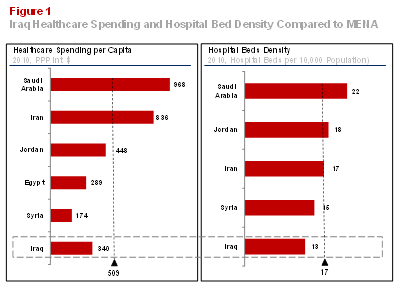 Over the past few years, Iraq pharmaceutical market has experienced fast growth, both on the generic and originator drugs segments, compared to other developing markets. Among similar markets in Eastern Europe, Middle East and Africa, Iraq had the highest growth in pharmaceutical market over the period 2006-2011, with ~17% CAGR (see Figure 2). 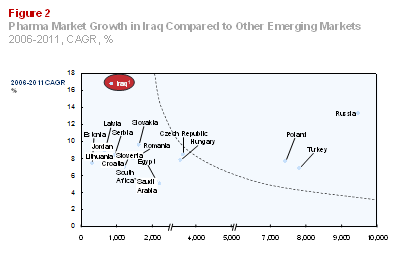 According to Business Monitor International (BMI), Iraqi Pharma market is forecasted to grow by 10-15% annually over the next seven years. As shown in figure 3, Iraq pharmaceuticals market is expected to reach US $ ~2.4 billion by the year 2020. 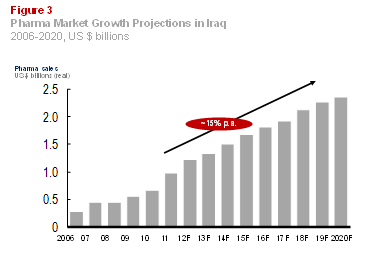 The Iraqi pharmaceutical market is fragmented with no dominant players 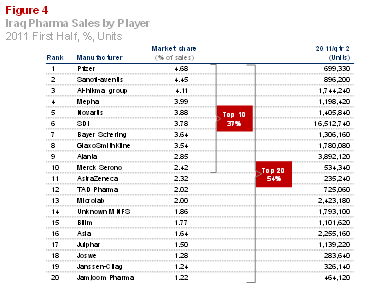 Along the drugs distribution chain in Iraq, several types of entities exist that differ in role

Manufacturers: drugs manufacturers are the actual producer of the drugs. Purchase of drugs directly from the manufacturer is only applicable for large volumes. 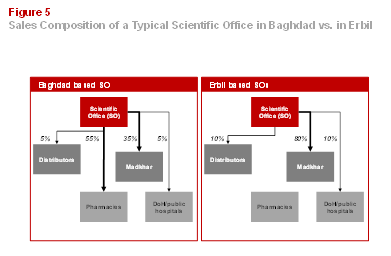 Small Drug Stores (Small Madkhar): Madkhar is a drug store that basically buys drugs from distributor/large Madkhar or scientific office and supplies them to public and private hospitals, and pharmacies. There are 125-150 Madkhars.

Currently, the drug market in Iraq is composed of three different segments; two are public sector and one is private sector.

Ministry of Health (MoH): Through the State Company for Marketing Drugs and Medical Appliances (KIMADIA), MoH purchases drugs directly from manufacturers, due to large volumes, and distributes them to public hospitals and primary healthcare centers, through the governorate’s directorates of health. The estimated value of KIMADIA annual drug purchases is between US$ 400 million and US$ 600million. 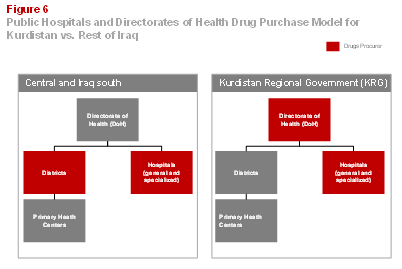 The estimated aggregate value of public hospitals and directorates of health’s annual drug purchases is between US$ 150 million and US$ 250million.

The different models of drug distribution in Iraq are shown in figure 7. The left box outlines the central KIMADIA procurement chain, while the right box illustrates the decentralized purchases of drugs by public hospitals, health directorates, private hospitals/clinics and private pharmacies. 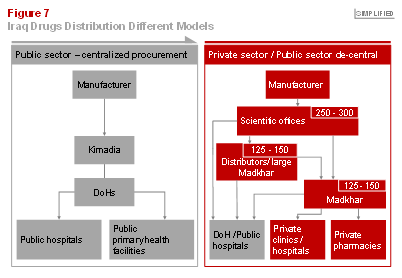 Given its current size and growth potential, the Iraqi pharmaceuticals market is one of the most promising ones in the region. However, the lack of reliable pharmaceutical market information, especially for the private market, represents a major disadvantage. Moreover, the little/ no penetration of electronic Point of Sales systems makes the collection and processing of sales information extremely difficult, thus discouraging many international Pharmaceutical manufacturers from stepping-up their activities in Iraq, e.g., by setting up their own import/sales infrastructure or even manufacturing facilities. Therefore, creating reliable drug sales data for the private market through regular pharmacy audits will be a crucial component to create the necessary visibility and transparency that international Pharma companies would require if they would increase their “commitment” to the Iraqi market.

To achieve success in the Iraqi market, several strategic elements needs to be addressed:

Balanced strategy between public and private market segments: Given that the Iraqi market is almost equally divided between public customers (both KIMADIA and the drug purchases of individual hospitals and health directorates) and private customers, pharmaceuticals companies need to develop a market strategy that is balanced between both sectors and takes into account the key differences, e.g. sales approach, procurement process, and drug portfolio.

Management Partners is a top-management consultancy advising leading private and public sector institutions from the US, Europe and the Middle East, with a particular regional focus on Iraq, UAE, and Saudi Arabia. The consultancy firm assists clients across industries in areas such as designing growth strategies, implementing operational performance measures and providing market intelligence through on-ground research.